Albania
Begins with a good intro and proceeds well until the chorus, when it goes a bit Radio 2. The singer saves it a bit by having amazing hair and nails.
It's probably a grower.

Austria
A long acapella intro shows off some impressive lungwork. A bit inspirational Disney,
complete with a key change and appearance of a concealed choir.

Azerbaijan
Like a rich tea biscuit - dull but not unpleasant.

Belarus
A recent trend has been the self-promotional Eurosong (cf LT United, The Balkan Girls, Irlande Douze Point etc etc) but this is a bit different and has absolutely no ironic wink to the audience. I like it, but I feel that the chorus is a bit too close to 'Ra Ra Rasputin' to count as strictly original. If the video is anything to go by, the stage show will include some people in traditional costume dancing, which I always love.

Belgium
You can never tell what the Belgians are going to contribute. This year, we have some
slick and nonsensical acapella vocal jazz in our gift from Brussels. Remaining so
defiantly out of step with modern pop takes some doing. I take my hat off to them. The beatbox section was quite good though and I liked the way they did the keychange.

Bosnia & Herzegovina
Real end of the night drunken 'life is hard but we get along' stuff with a touch of
oompah. I hope the man gets a better jacket for the big night in May.

Bulgaria
A rock ballad by an impressively coiffed young rock chick. I spotted a keytar in her
band, who were all playing seated until the second verse for no apparent reason. I like it, but as it's in Bulgarian I think I will have to make up my own words before I can put it onto my 'Clenched Fist of Emotion Angsty Singalong Playlist'. "Oh, my emotions are all stinky!" the chorus could go.

Croatia
Mid-nineties dance here. The singer has a very captivating nose and exhorts us to 'put our hands up' and have a good time. It's pleasant, but I don't know if it's memorable enough to make it through the semis. Luckily, Croatia will probably have enough friends to put it through regardless.

Ooh, the breakdown there had some dubstep wub-wub-wub noises in it. Modern!

Denmark
I suggest that we could be looking at a Danish win. This song already sounds like the
end of an 'emotional journey' documentary or a blast of confetti on a man holding a big glass trophy. I am not just saying this because one of my favourite Eurovision pals is Danish. I do think the giant white balloon things are cheating though.

Estonia
Rockefeller Street is just nonsense and is ruined entirely by the awful loud shouty
grindy bits after the choruses. I was prepared to get behind this song until that.

Finland
An adorable, if slightly worthy eco-ballad. It's a bit like what we were all listening to when Travis were big. You can even probably sing the chorus of 'Writing to Reach' you over the chorus of this one if you wanted to.

France
Oh, France. This is getting silly now. I preferred Sebastian Tellier with his daft golf cart and his bearded backing singers. This sort of soft opera crap hasn't been
considered pop music since the charts were decided on who had sold the most sheet
music. Play the bloody game.

Georgia
Rocktastic and quite fun. I wasn't expecting the rapper, but I don't think it
detracted. I would have liked more singer/rapper interaction because I love a shouty
boy/girl duet.

Germany
Lena is already massive. I quite like this - reminds me a tiny bit of Lykke Li or any
of the icily-temperamented sexy pop ladies of recent years. Love it, but it's too kinky and wierd to do well in Eurovision. I have, however, put it on my main Spotify
playlist.

Greece
Back to ridiculous Europop with a song featuring rapper 'Stereo Mike' (not the same one from that song where some guy said 'This is Stereo Mike? Stereo Mike?). Do you remember when the UK put some gentle, non-threatening urban music by Love City Groove in for Eurovis and it didn't do well? Well I finally think Europe has caught up. I've noted the presence of about half a dozen rappers, beatboxers and allied trades, which at least means Eurovision has moved forwards.

I didn't care for this song at all.

Hungary
Generic upbeat disco stuff. Enjoyable and with leanings towards being anthemic. Cher
would have had this on the 'Believe' album.

Ireland
I was recently trying to explain the concept of Jedward to some non-Brits and was
reminded that two halfwits do in fact constitute one wholewit. The video is really,
really troubling, but not as troubling as the jedward twitter feed that I follow
because I cannot look away. I am not sure if it is alright for Jedward to be out in the world, but they seem happy enough. I cannot wait to see what havock they can wreak in the green room. The song is listenable tosh, but it's more or less besides the point.

Israel
Dana International returns with some sort of treatment on her vocals. I'm glad she's
back and all that, but I wish the song was at least an order of magnitude better.

Italy
Back after 14 years, Italy supplies us with a rather classy number that belongs in an
underground bar at about 1:20am. From the music video, I presume it is also connected
with a film or soap or something. Unsure.

Latvia
Upbeat dancepop from a pair dressed like they're leaving the X Factor on Big Band Week. It's got my favourite linguistic quirk so far - to whit: 'Kill me with killer kiss! Kill me with tenter lips!"

One of them does a rap that I would go so far as to describe as 'nerdcore'.

Lithuania
A melodramatic intro leading to a melodramatic torch song. I thought there was
potential for some skirt-removal when the beat kicked in but alas, it never did.

Malta
Malta submit a winning, dancey plea for equality and tolerance that is basically GaGa's Born This Way but a little bit less good.

Moldova
Big dumb rock chorus with verses featuring some sort of local Moldovan wind instrument.
Compelling. The NME could potentially like something like this, but only for one week
before an inevitable vitriolic backlash.

Netherlands
Aural teflon. I cannot remember what it sounds like and it's still playing.

Norway
I thought I could hear autotune or something on the gal's voice, but it was enjoyable
and listenable. The chorus is in Swahili, which I thiiiiiink might be the first time
lyrics in Swahili have appeared at Eurovision.

Poland
You can reconstruct this song in your head by imagining Britney's 'Womanizer' and
systematically stripping all the fun production touches off it. Harrumph, harrumph.

Portugal
It's the quirky one! I interpreted this as being some sitcom characters singing a ditty about socialism or trades unionism. It's called 'The Struggle' and I suspect there is some wordplay in it that doesn't translate. (I looked at the bio after writing this and it turned out that I was right. They are comedians & it is about socialism.)

Romania
Like Mika, but less squeaky. The further you get into the song, the more Mika-like it
is.

Russia
Some guy in tight black jeans doing a song that 911 or A1 would probably just about
have got away with in the 90s.

Slovenia
Another vaguely gloomy number with some twangy sitar very low in the mix and some
totally overenthusiastic dancers who I hope she is keeping for their entertainment
value.

Spain
Awful. I don't know why I found this more objectionable than some of the others, but I certainly did.

Sweden
Straight down the line male-fronted Europop. Maybe it's been a long day, mayber I've
watched too many Eurovision entries today, but aside from the glass-smashing, I found
it pretty ordinary. Of all the records, this one was most like something that would
actually be in the charts, which you'd expect because Saade is a proper pop star.

Switzerland
I was sure that the riff was ripped off an advert for an ipod or a cosy insurance
company. Like Fairground Attraction, but without the charm.

Turkey
For a song about being cool and having louche rock and roll fun, the actual music and lyrics falls slightly short of cool and louche. It's only ok.

Ukraine
A winsome blonde in a series of neo-Victorian circus-themed vignettes sings a song of the sort that you could possibly get Aguilera to stick on your film soundtrack. Overwrought and vaguely unpleasant, and contains what could have been the biggest keychange transition of the night, if only it hadn't have wimped out.

UK
We should probably just give up and send random nonsense.
I am not the first person to point it out, but: 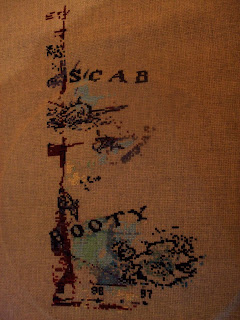 I love the outline of the island and the shading on the sea area is starting to look great - can really see where the markings and folds will be.
Posted by ellielabelle at Saturday, March 12, 2011 2 comments:

You've got to have a quest.

Last year, the quest was to finish my PhD.

I haven't had a quest for a while, but that was because I was addicted to WoW and they give you more than enough quests to be going on with.

Just before Christmas, I quit WoW and as well as experiencing a sudden influx of unallocated free time, I started to feel that my quest valency was starting to increase. It took me a while to figure out what my quest was going to be, though.

Rejected quest candidates include:
- Learning Latin with a view to read Cicero in the original
- Designing and sewing an evening gown inspired by the jumpsuits of Vegas-era Elvis
- Taking up weaving on a loom
- Healthy exercise!
- Getting some actual publications out, like, ever

I settled upon a quest this week and I think you're going to like it. 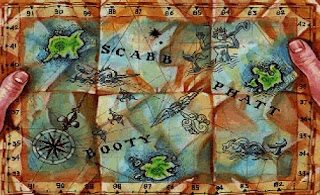 I'm going to do a big cross stitched version of this map, which you may recognise as being the map that you use to travel around the Tri-island area in Monkey Island 2.

I'll be turning this packet of threads... 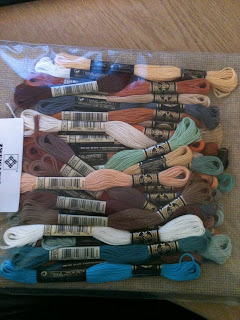 I think I started three days ago. I've not got that far yet. 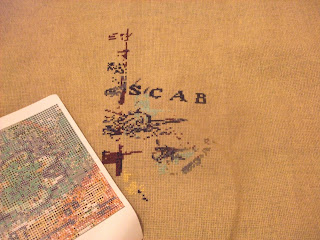 Hilarity ensues as I begin an endeavour to cross-stitch a replica of the tri-island area map from Monkey Island 2.

It began with a sort of dolphin thing.