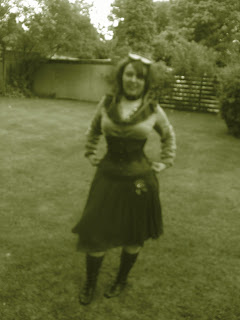 On Saturday night, I went to see steampunk musical heroes The Men That Will Not Be Blamed For Nothing in a strange leopard-print tent out the back of a pub in Digbeth. I've been listening obsessively to their album on spotify and as an enthusiastic fan of dressing-up-ridiculously-at-events-that-might-call-for-such-things I togged up suitably.

And that outfit in colour: 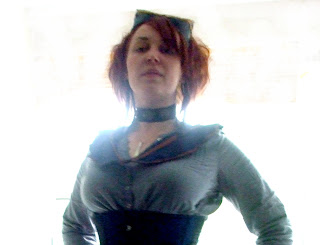 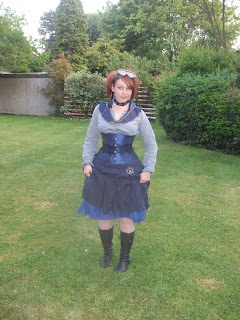 I had most of the stuff already - the skirt, blouse and boots are from my normal work wardrobe. I made the pleated petticoat out of some muslin from my dressmaking box and the little collar was some other dressmaking scraps trimmed with brown ribbon and irregular matte brown sequins. The corset comes from my existing collection and the choker is black ribbon with some marcasite beads from a broken bracelet. The goggles are embellished with sugru around the rims and painted over with pewter and brass acrylic paints and settled in my epically backcombed hair. Smart, right?


But what about the bands? The first support band Frenchy and the Punk were really enjoyable. It's a bit hard to describe their style, but I recommend you watch some of their live stuff.

I'll draw a neat veil over the second support band and proceed onto the main event! TMTWNBBFN! (tmtwnbbfn!)

They had us singing "Isambard Kingdom! BRUNEL!" and about the London sewers and Boilerplate Dan and marveling at the use of a musical saw. Victorian Grindcore was a marvellous gag, and the Royal Wedding was marked by a medley of both God Save The Queens. The new songs (variously about a Lovecraftian excursion to Margate, the Great Stink and an unusual form of contraception) made me impatient for the second album, especially as the size of venue and some sort of mixing oddness at the sound desk made it hard to pick out a lot of the lyrics during the more thrashy songs.

But a great time was had by all and it kicked off in a reserved, genteel manner for the more established tunes like Goggles, Steph(v)enson and Etiquette.

The best thing about The Men Who... is that they're really strong musically. My boyfriend enjoyed their extremely chunky metal riffage as much as the songs about cool stuff with cogs on. Excellent!
Posted by ellielabelle at Monday, May 02, 2011 No comments: