We've been here for four whole weeks now. We got through the 'WHAT HAVE WE DONE?' phase with a certain style and aplomb, we found the hummous and registered as officially sanctioned Amsterdammers and now we both have bikes. Cycles. Fiets. You know, velocipedes.

J brought his existing bike from Cardiff, and I have plumped for a delightfully lightweight aluminium road/commuter bike with seven gears, basket racks and a purple bell that says "I <3 My Bike". I can't say that I do <3 it yet, being that it gave me a pair of big purple bruises when it bucked me onto the pavement during my first long ride, but I am at least doing better than last time I cycled in Amsterdam (keywords: panic attack, canal edges, short skirt, expensive tights, total freakout).

No pictures this time, but as I'm nearly halfway through the Monkey Island cross stitch project, BRACE YOURSELVES.
Posted by ellielabelle at Wednesday, February 29, 2012 1 comment: We went for a walk to try and connect up parts of Amsterdam that we'd previously visited with the parts we now live in. What we mainly saw was hundreds and hundreds of people skating, sledging, sliding and drinking gluhwein on the frozen surface of (I think) Prinsengracht. 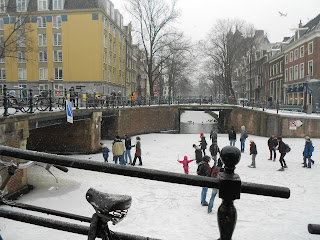 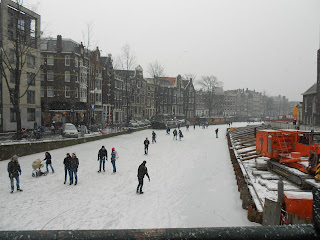 It continues to be below freezing in Amsterdam. It appears to be warming up after the weekend, but not before we get one last blast of what I am learning to call 'schneeuw'. 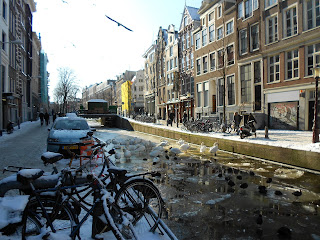 The canals have largely frozen over, the pavements are a treacherous, icy mess (although the bike paths are clear) and going outside is a major operation. 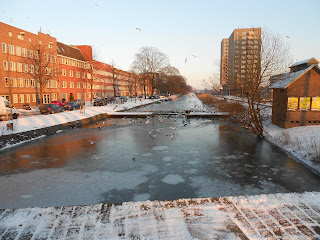 I tried to make the cold go away by knitting these charming blue mittens which seems to be working. I don't have too much in the way of charming local detail for you this week, only a report that I can express my own incomprehension and incompetence in Dutch. In a way that makes people laugh.

The two major things that we did this week were to get registered as official residents in Amsterdam and get ourselves bank accounts. It's almost like we're staying here for good.

I continue to miss having access to iplayer, because we've not sorted out a vpn tunnel. We do, however, have the parts on order for a hardware solution to our TV problem.

I also find myself coveting domestic electricals - they have these raclette grill things (also called 'gourmets') which I want but I fundamentally don't know why, and I'm also wanting to solve the problem of my continuing Radio 4 addiction by getting an internet radio gizmo like this one.

Then we get to the coffee grinder problem. I see a lot of coffee beans being sold in shops - usually taking up more shelf space than ground coffee - but I don't see any coffee grinders being sold next to the stunning arrays of coffee machines. Not all the machines are bean-to-cup either, most of them assume that you have some way of getting ground coffee. But this is probably just a continuation of the ongoing expat problem of not knowing what shops sell things.

I guess I could just put a big Amazon order in. That usually solves everything.
Posted by ellielabelle at Friday, February 10, 2012 No comments:

I Promised You This Blogpost About Our Move 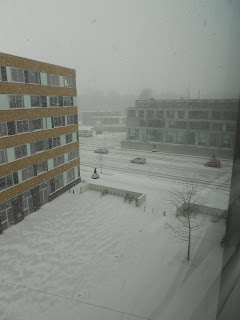 We only went and moved to Amsterdam!

In a fiercely planned operation, my bf & I packed up our respective households in Cardiff and Birmingham and sent all our stuff in a van to a mystery flat in the Middenmeer district of Amsterdam, thus forcing ourselves to go after it. On Tuesday afternoon we got in the car with a boot full of random things and drove, in a leisurely manner, to the non-glamorous international port of Harwich. We passed about a dozen Little Chefs and stopped in two of them (I had Jubilee Pancakes which came with cherries and ice-cream) and accidentally went into Kettering looking for a nice coffee that was never going to be found.

We arrived in Harwich at 8pm, and thinking that we wouldn't be let onto the midnight ferry we were booked on for a good three hours, we had a sad car picnic of cheese rolls and crisps while listening to an audiobook of The Secret Agent (it's about bomb-throwing anarchists and is tremendous). Of course, no sooner had we finished our repast than we were let onto the Stena Hollandica.

Car ferries appear to have changed since I was last on one, and I found the ferry unexpectedly nice. We had a cabin, which was quite plush in a sort of moderately luxe capsule hotel way. The cabin had a bathroom and a great deal of solid fake wood moulding. It was cool, I liked it. We had another dinner, because why not? We're ON A BOAT!

In the misty early morning, without having had quite enough sleep for the previous three nights, we pootled out of the boat and onto the motorways of the Netherlands. It was below freezing at this point, and it's been 0C or (quite a lot) below ever since. But yeah, we dragged ourselves to the flat in Middenmeer and pretty much fell over with tiredness.

The flat is, well, temporary. We're only here for a short while and will be moving when I've got my next job. It's a huge flat over two floors with a big open plan living room/kitchen and two large bedrooms and a bathroom upstairs. The place has excellent climate control and underfloor heating, which has been unbelievably useful in the wintry blast. When the stuff gets here on Monday, that'll be great (quite a lot of our warmest clothes are in the packing boxes) but we've got a very tolerable set up until then.

What else has happened, apart from the Arctic blast? Oh, we found an anarchist bookshop and cafe, which was nice.

I will fill you in on the rest later.
Posted by ellielabelle at Sunday, February 05, 2012 No comments: