When you get serious about knitting, you start to get serious about your tools. Getting a ball winder is just perfect for making squat, delicious cakes of yarn and seems like a fairly reasonable expenditure (It has a crank handle! It has COGS! It was only £20!) but between space and financial concerns I've never got round to buying a beautiful umbrella swift, so winding yarn has always been a slightly fraught process.

There are many good methods for making homebrew swifts, (lego, PVC pipe, etc) but none of them used the materials I had to hand. 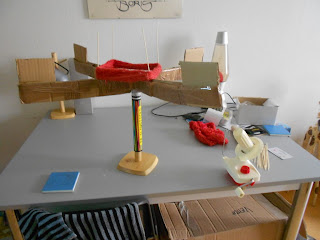 To make a swift like mine, you will need:

A large piece of corrugated cardboard (like the side of a box)
Wide tape, duct or parcel (either works, but you may prefer a colour)
A sturdy cardboard tube (preferably with one closed end, but you could close one end yourself)
A spare kitchen roll spike (not necessarily even spare, because it won't be destroyed
Some pencils, sturdy skewers or other long thinnish rods. 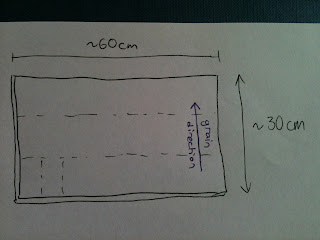 2) Cut two strips about 10cm tall and about 60cm long, as shown in the hand-drawn diagram above.  Make sure you're going across the grain of the cardboard, not with it. This is important for the load-bearing capacity of your swift.  Score through the surface of the corrugated cardboard along the midline (see diagram below) to make the next bit easier.

You'll also need two more strips of cardboard, which should be about 5cm tall and about 10-20cm long. These are your  hinges.

3) Fold the pieces of card in half along the score line. Tape it closed like in the diagram below. Then gently perpendicularise the pieces, avoiding making a sharp fold. Keep it curvy. You probably won't be able to keep them folded like this, but... 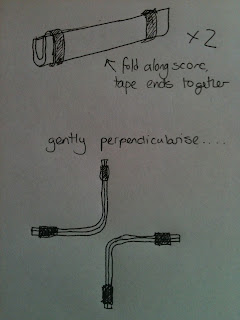 4) ... now you start to join the two halves of the cross together. Tape one end of a hinge just outside the perpendicularisation fold of the first half, and then tape the other end of the hinge to the corresponding bit on the second half.  This bit is likely to be a bit awkward, but when it's done you can place it down on a table, form the cross shape and then get the second hinge in position with relative ease. Duct tape it all down securely, making sure you've left a hole slightly smaller than the tube you're going to insert in it.

This is a bit difficult to describe - have a look at the diagram to see where the hinges go. 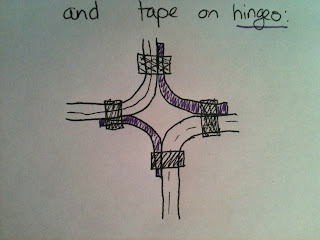 5) Now insert the tube into the slightly-too small tube hole. It ought to stay put, but if it doesn't, try adding some thickness to it with a couple of layers of tape. The closed end of the tube should be on the same side of the cross as the open side of the folded arms.

6) Then pop your tubey-cross assemblage on your kitchen roll spike and check that it rotates smoothly. It does? Great!

7) Insert your skewers/pencils into the cardboard fold of each arm to create the yarn holding pegs. You can tape them into position, but I'd folded and taped the arms so securely that the pencils just stuck where I put them.

8) Set up your ball winder on the table, put the swift on the floor (or a lower table) and get winding. It should just about work.