It's Eurovision time, and I'm considerably busier than this time last year when I didn't have the job I do now.

Previously, I talked you through the runners and riders in Semi Final 1 and Semi Final 2 and I sort of left it hanging inconclusively without really giving any indication if I thought any of the songs were particularly better than any of the others. There's also this ONTD preview post which has more up to date vid links.

Since then I've been to the Amsterdam preview concert (photos of the show here) with my sister, where we went in absolutely sure that Zlata's Gravity was going to run away with it and we came out feeling really enthused about Ireland's heart-hands aloft, sweatily be-vested bodhran players but unable to remember how the song went. Koza Mostra played Alcohol is Free twice and we were able to do some quite good ska dancing. It was ever so good - if the actual finals are even better than that, I'd be needing new pleasure receptors in my brain and MORE GLITTER.

Because I'm not a safely vanilla ballad fan in this year of safe vanilla ballads, I'm seriously incapable of working out who I think is going to win. Instead, I'll share with you some tidbits, snippets and nerdy details.

I've been logging all my music listening on last.fm this year - here you can see what I've been mainly listening to in the past month... 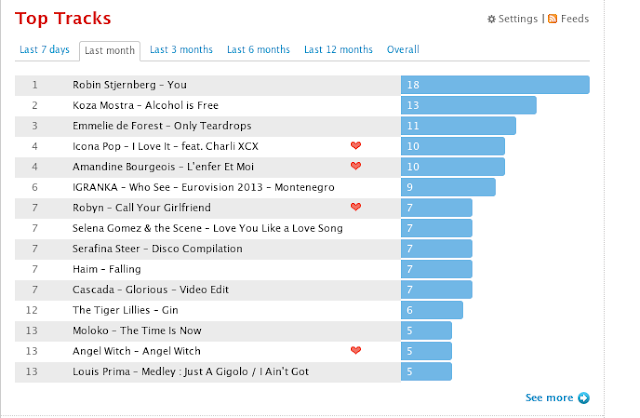 ...and you can basically see that I've had a serious earworm of the Swedish song but that I also have been enjoying Greece, Denmark, France (Amandine!), Germany and Montenegro. I don't think that my musical taste (which is a mess) is particularly representative of either a jury vote or the general voting public, so I went and did some other data collection exercises and had a look at how my fellow scrobblers are doing with the songs. 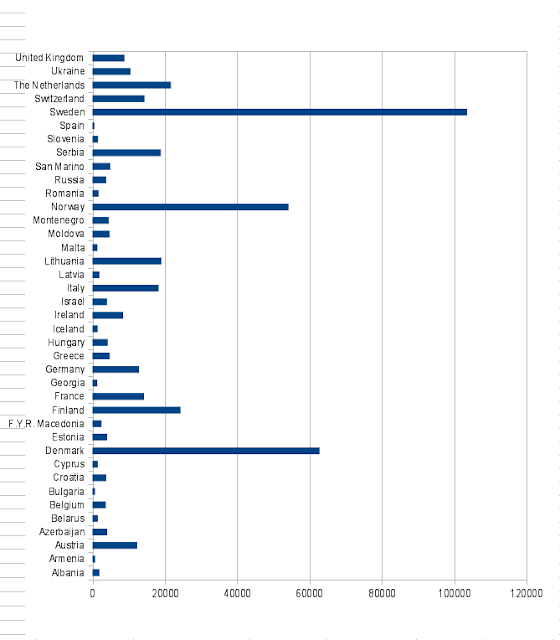 As you can see, Sweden appear to be running away with it here too. But I have reason to believe that looking at the last.fm listens is kind of useless , because essentially there are too many factors baked into the data. 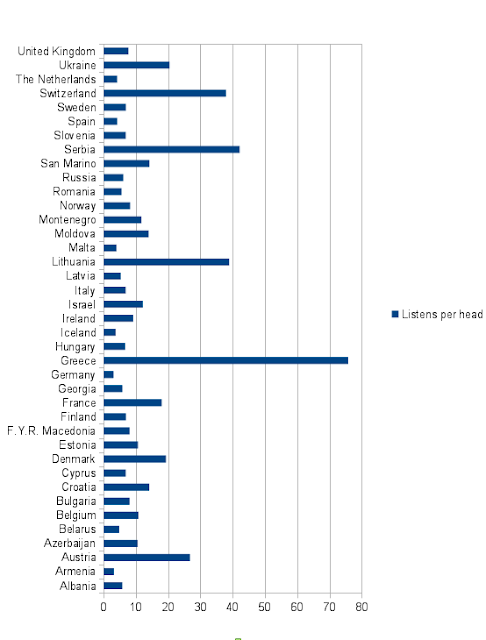 So to conclude, I still have no idea who will win. I used to think it might be Ukraine, and wouldn't put it past Sweden to win again. I don't think that Danish song is as winning as everyone seems to think it is,  and as much as I love the Norwegian and Montenegrin songs, I don't think they're universal enough. I'd love Finland to win, because now I know it's apparently a tongue in cheek message about marriage equality, that makes me feel less weird about the lyrics, but I don't think it will win.

I guess the big question is, does Europe feel like a ballad or a party?