Finally, we reach the last part of this epic musical journey. If you are here for graphs, you're in luck.

If you missed earlier parts, here they are. Semi Final 1 Semi Final 2

My long-held and oft-repeated position is that there are two Frances when it comes to submitting a song for Eurovision. Fun France, which sends Moustache and Les Fatal Picards and Sebastian Tellier, is my favourite. Serious France wants to send a worthy chanson every year, and they have finally managed to come to a sort of a compromise. J'ai cherché is both breezy and fun, but also significantly less goofy and off the wall than a lot of the Fun France entries. As such, it should do really well.

If you just listen to the audio on this, you’ll just be thinking “Crikey moses, there’s a significant amount of ripping off Lana del Rey’s schtick going on here”, but the totally off the wall K-pop fairytale presentation on stage made me not come to that realisation immediately. It’s Eurovision, so immediate impressions count. If everyone is gawping at Jamie-Lee’s knee socks and hair arrangement then they’ll be allowing the familiar music to wash gently over them and they’ll feel comfortable that they already sort of know how the music goes. Then they might pick up the phone. It’s quite a good choice, although obviously I’m still smarting that the German people didn’t pick Avantasia’s totally immaculate Jim Steinman pastiche.

This is such a lovely song, and Francesca is such a lovely, intense singer. If I were to do a league table of ballads in this year’s contest, this would be coming out near the top. As ballads go, it builds nicely and delicately but lacks the massive power of Australia, Ukraine, or even Estonia. I think it’s quite subtle. How does subtle do at Eurovision? Hmm.

I love it. I love the original version and the reworked version. I even loved the version in the National Final when she was obviously massively over-excited and blew the vocals. For me, Barei is so charming and so charismatic that I’m even willing to forgive the little trainer dance gimmick. It’s absolutely sunshiney and joyful, and I bet that if they draw the first half for the national final they’ll get put in the uptempo show opener position like Slovenia did last year. They’re working really hard with the promo tour, but I don’t think it’s a winner. I would totally like it to win though.


Sweden If I Were Sorry - Frans

The main thing about this song is how good it is without being your average Melodifestivalen type of song. Like I was saying earlier in Part 1, it’s so resolutely untypical of the big, bright, shiny, Swedish banger that it probably does signify a bit of an upcoming change to the overall sound of the contest. I don’t actually like the song, sadly, I feel like Frans is being a bit of a turd about this breakup. Stop going on about it. Move on, lad.

UK You're Not Alone - Joe and Jake

I mean, it could be worse. They let us have a national final so that we could be deemed responsible for whatever the result was, and in much the same way as has happened around Europe, the contestant who has most recently been involved in a televised talent show won out. You’ve got to imagine that next year the national final season will have realised that there’s a fundamental imbalance in pitting brand new artists against reality TV veterans in a one-shot national final. Anyway, there’s nothing at all offensive or at all ear-catching about this song. That’s worse than Serhat, in a way.

STATS CORNER
Ok, so I made a table of what the general state of the Eurovision offering is this year. All the categories that made it to the table are measurable, objective quantities apart from the genre, which is always a bit hard to pin down. 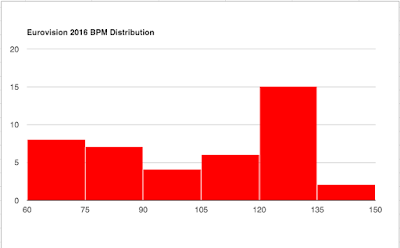 Histogram showing ESC 2016 songs in 15 bpm bins. It looks like a lot of songwriters start at about 120 bpm and then it gets faster in production.

And so there you have it. The Eurovision song contest looks like a woman, alone in the spotlight, supported by two to five hidden backing singers, singing a song that's a bit faster than 120 bpm with an inspirational message about love or hope.